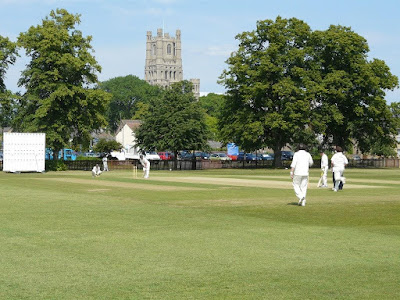 I suppose I must admit to being quite a nostalgic person. It's all a very long time ago, but I often think back to my old headmaster's obsession for his 'Three C's'; Christianity, Classics, and Cricket.

Having been a teacher myself, albeit briefly, I am only too aware that teachers can have a lasting effect on a child's future, and teachers need to be aware of this fact at all times.

I was never too keen on the Christianity bit, but I did enjoy the singing. My school also happened to be in close proximity to a lovely old cathedral (above).

As for Classics, I had a wonderful teacher at my Prep' school, and somehow managed to achieve the highest mark in my intake year's Latin entrance exam paper, and, to everyone's amazement (including mine), I became the year's 'Classics Scholar'. I later abandoned my study of Latin (the result of dire teaching), concentrated more on Art, and later won the senior school Art Prize. My headmaster wasn't amused.

Cricket has probably always been my game of choice, so I was very happy to take part in this third of my headmaster's obsessions, although I never got chosen to play above the 2nd XI. I'm pleased to say that my oldest, Kimbo, shares my love for the game, and has continued to play quality Club Cricket since his Oxford days. He still plays, and regularly puts on a good show! Cricket teaches us so much more than just how to bat or bowl, it teaches us to take defeat with dignity, to praise the better man, and that the Umpire's decision is always final. Not bad maxim's by which to live.

Some people show no lasting influence from their schooldays; mine still play an important part in my life. As Ignatius of Loyola was 'reputed' to have said "Give me the child for the first seven years (in my case a bit more), and I'll give you the man". I have a friend who was educated by the Jesuits, and he always describes them as the most evil bastards imaginable. Not, I'm sure, what St Ignatius had intended; unless he was a psychopath.