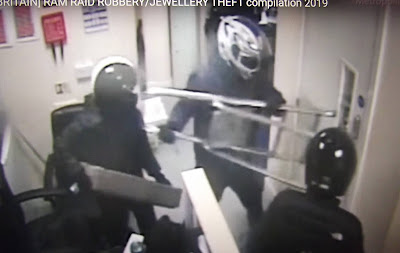 There used to be a very short BBC Radio programme with a title similar to mine.
It asked eminent people what law they would rescind, given the opportunity.
The edition that amused me the most was with a well-know top judge (I can't remember his name) who was so annoyed with motorcyclists tearing around with little regard for either themselves or others, that he wanted to ban the use of helmets. His logic being that without head protection they would ride their bikes much more carefully.
These days we see so many pictures like the above. Criminals wearing either crash helmets or hoodies whilst carrying-out their crimes. Personally I would take the judge's idea a bit further, and ban hoodies as well. Faces should be seen at all times. I would suggest that the only places where faces could be hidden are 'at home'. Anyone hiding their face in public would instantly be taken for a criminal, and arrested.
Of course, at the moment we all have face coverings, and it must be a nightmare for the police, but when things eventually get better, and we are allowed to breathe again in public, I would like Boris to enact this change immediately.
Posted by Cro Magnon at 04:25