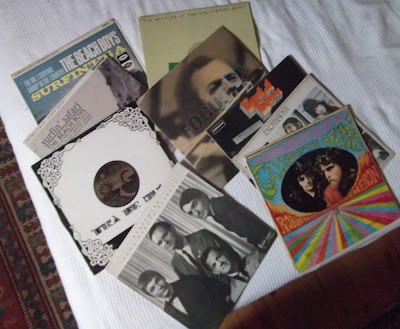 This is becoming a nostalgia page.
I'm not quite sure why I have these records (above) in France, because we've never had a record player here.
You can probably tell as much about someone's character from the vinyl albums he/she owns, as by the books in his/her library.
Having been an Art Student for 5 years in the late 60's/early 70's, my taste in music is definitely representative of that age and probably also of my occupation.
Above is a selection of some favourites that were listened to, probably amongst clouds of strange smelling smoke, whilst also probably sitting crossed-legged on the floor.
The Incredible String Band was essential listening, East of Eden and The Third Ear Band were more suited to acid-induced listening and were definitely 'underground', The Beach Boys were simply fun, Kraftwerk was tedious, and my favourite band of the time, was the Dutch jazz-rock band; Focus.
Focus was a 'musicians band', and possibly the only album (Focus 3) in my collection that I would listen to regularly again; if I had a record player.
Back then, we listened to a lot of pretentious rubbish, but in amongst it all were a few real gems.
Posted by Cro Magnon at 04:52