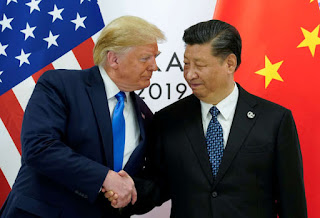 I get very annoyed by all the irresponsible reporting that circulates about COVID. I read countless daily criticisms of Trump and Boris. The Democrats in the USA, and the Socialists in the UK, would almost have us believe that between them they'd developed COVID-19 in some back room, and released it in order to kill-off as many of their own citizens as possible.

As bad as the pandemic has been, this is clearly nonsense. Had Hillary been elected in the US, and Corbyn in the UK, they would no doubt have handled the situation in exactly the same way; and suffered the same criticisms.

The only name that doesn't appear amongst such critiques, is that of Xi Jinping. If anyone should be pilloried in this pandemic; it's him. Even now the Chinese refuse to give details of how, and why, this virus managed to escape.

Conspiracy theories abound; most of which are pure fantasy. China's ruling 'politburo' keeps a tight hold both on it's citizens, and on the information it reveals, so I don't expect we'll ever know the truth, although many China-escapees are suggesting that this was a Laboratory Developed Bio-Weapon that found its way out.

What we are certain about, however, it that the resulting global economic disaster will take years, if not decades, to remedy, and maybe China should be made to cough-up!

Can Xi seriously allow such a disaster to happen, killing over a million people, and not be held responsible?