A Breakdown in Society? 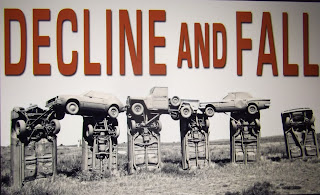 Gibbon affords the 'Decline and Fall of the Roman Empire' to five specific causes. Corrupt Politicians, civils wars, attacks from outsiders, a toothless army, and the empire itself becoming too large to manage.

I see many comparisons in today's world, only we also have the added disaster of COVID-19.

Firstly our politicians. We all know what is happening here. We have the crazies, the megalomaniacs, the evil, and the downright criminal. Luckily most of Europe is ruled-over by intelligent and honest people who care about their citizens.

Civil wars are still in their infancy, but they will certainly become more important; for the moment we still refer to them as 'riots'. We have those who are blatantly anti-Democracy, others who are racially motivated, and yet more who are religiously driven. Governments are currently taking such activities far too lightly, and the perpetrators are given false support from such lax response. Sweden has been a classic example of such liberalism. There's a lot going on that needs to be watched very closely.

Attacks from outsiders covers a multitude of woes, from Brexit, to cyber attacks from Russia and China, the USA's export of poor food standards, to The Muslim world; there are people everywhere who either wish us ill, or want to take us for everything they can get. Again, just look at Sweden.

Defence of the nation is a priority for any Prime Minister or President. Neglect it at your peril; and IT IS being neglected.

And finally an unwieldy Empire. Well, Great Britain's Empire was the greatest in history, and we all know what happened there.

Gibbon wrote his oeuvre in 1776, only a few years after Cook established Botany Bay less than 250 years ago. Since then there have been two World Wars, a flu' pandemic that killed anywhere between 20 and 50 Million people, disruption in the Middle East, and a population explosion that is taxing the finances and social welfare of most first-world nations.

I don't expect the worst of this to happen until I'm long gone, but if history is anything to go by; happen, it will.

Am I worried? Well, no not really. The anti-democracy movement is slightly worrying, but they'll soon see the error of their ways when they actually experience the practical side of anarchy.