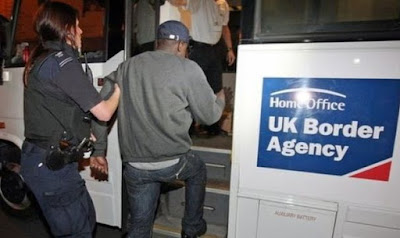 For the sake of correctness, I thought I'd better state the actual facts about the recent UK 'deportations'.

There has been so much nonsense written and spoken recently about the deportation of foreign criminals, but who could have imagined that so many ill-informed activists would actually campaign for them to be kept on our streets, rather than being sent back to their own countries, as demanded by Labour's 2007 UK Borders Act. This would have been unimaginable only a few years ago; certainly during Blair's reign.

But twenty-first century lunacy is all around us. Bizarre virtue-signallers have now halted the deportation of 25 extremely nasty illegal immigrant criminals, amongst whom were a murderer, two rapists, and seven extremely violent individuals involved in knife and firearms offences. The rest were everyday burglars, thieves, etc. All of them were foreign nationals. Apparently it would be against their 'Human Rights' to send them home. They will now need council funded homes, plenty of spending money, and probably constant police surveillance to apprehend them should they commit more crimes, as in the recent case of Sudesh Amman (even though Sudesh had all of 20 policemen watching him).

When The Labour Party introduced the UK Borders Act in 2007, the act insisted on 'automatic deportation' in the following conditions.

Section 1. (Foreign Criminals)
(a) who is not a British Citizen
(b) who is convicted in the UK of an offence, and
(c) to whom Sections 1 or 2 applies

Section 2. On condition that the person is sentenced to a period of imprisonment of at least 12 months.

It must be noted here, that in 2006 Tony Blair deported 29,040 people without a whisper from the do-gooder 'Human Rights' brigade; not even from the fragrant Cheery herself (his lovely lawyer wife) who defended every wealthy ne'er-do-well imaginable!  I don't remember any 'campaigners' in 2006, but just like a stick of rock, hypocrisy is written right through these people.

You couldn't make it up, but David Lammy MP, himself, who has been extremely vocal about the deportations, was a minister under both Blair and Brown, and actually voted FOR the 2007 UK Borders Act. If he wants to blame someone for the present few expulsions, he need look no further than at a mirror; not accuse the Tories!  What a disgrace he is.

The stupidity of these campaigners amazes me. They should go ask the family of the murdered man, stabbed in the back by Fitzroy Daley, if they wish to see him back on their streets. Or go and consult the young girls raped by Fabian Henry. Or anyone affected by all those who are considered by The Home Office to be 'a danger to the public'. These campaigners make me sick; how could the UK have come to this? How could anyone in their right minds wish to see these people back on the streets, rather than returned to their own countries? If any of them in the future should kill, rape, or continue in any way to be a 'danger to the public', let their supporters then apologise, and take responsibility. 'Guilty by association' comes to mind.

It would only be a complete fool who would blame the present Conservative Government for enacting the previous Socialist Government's UK Borders Act; but, believe it or not, this is what they're actually doing!

The question is a simple one; does it make the UK a safer place to live, with foreign criminals on their streets?

I could go on, but it's all far too depressing. À bientôt.