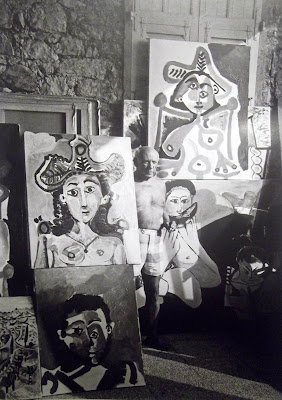 Picasso must be the most famous 20th C painter; his 'blue period' paintings such as 'Femme nue II' and 'Boy with pipe', are amongst the world's most popular cheap reproductions.

Like him, or loathe him, there is hardly a single person in the western world who hasn't heard his name.

The photo above was taken in 1964, and the works that surround him are typical of that time. I went to an exhibition of his 'current works' at the ICA a few years later; the works above might well have been included in the show.

What I saw was an exhibition of slap-dash work, on very badly stretched canvases, that looked to me as if he was simply filling his coffers on the backs of a gullible public who were willing to pay a king's ransom for one of his inferior works. The whole gallery smelt of fresh oil paint.

There is no question that he was a ground-breaking painter, and his reputation is well deserved, but there came a time when he was producing nothing more than pot-boilers, and no longer 'agonised' about what he was doing.

It might have been better had he stopped working back in the 60's.