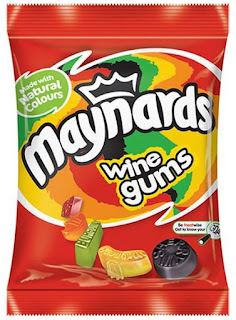 NB. When I say 'Wine Gums', I mean 'MAYNARDS Wine Gums'; nothing else is worthy of the name.

There was a time when I was totally addicted to Wine Gums. I could eat 1 lb a day, easily. I had to hold myself back.

When I was working on the London Stock Exchange, there was an inter-firm Wine Gum tasting competition, and I represented my firm (Sheppards & Co). The idea was this; after a few pints at a favourite hostelry in Throgmorton Street, each firm's representative would be blindfolded in turn, and asked to identify the flavour of several Wine Gums. Usually about 5.

I don't really remember if anyone actually won or lost, but I did consider myself to be a champion of sorts. My main rival was an old school friend (fellow blue-button NL; who worked for Panmure Gordon & Co) and we locked horns on a regular basis; there was company pride involved. The main purpose of these evenings was the drinking of beer to celebrate the end of the working day; not the eating of Wine Gums.

I don't eat too many Wine Gums these days as they're not sold here, but if any member of the family really wants to be in my 'good books', then a pack of Maynards at Christmas always does the job.

On the question of sweets, I do very occasionally buy myself a packet of 'fizzy' Haribo Coke bottles, or even some Licorice wheels; but I have to do so in secret, otherwise Lady M would get the rolling pin out!