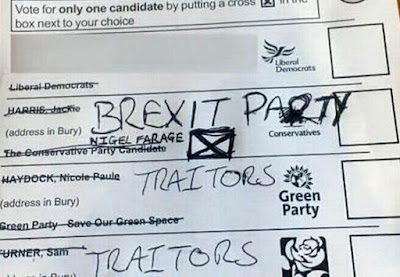 One week to go, and rather than blindly believing electoral hype (party manifestos), it is always far better to look at previous performance.

What have the different parties done in the past?
How have they left the economy after a period in office?
How did they perform on unemployment?
How many of their electoral promises were fulfilled?

On this basis, one can eliminate The Greens, The Brexit party, Independents, Ukip, etc, as they can promise whatever they like in the knowledge that their promises will never be challenged, and therefore mean nothing.

The only parties to be taken at all seriously are The Tories, The Socialists, and The Libs.

Let's start with the weakest. The Libs are homely and cute, they are the party you'd want to run a small village WI, or your local Post Office; their policies are that of a Parish Council. However, they are the sole party firmly committed to 'Remain' in the EU, and that will attract tactical voters from both the Tories and Socialists. They like to attract youthful voters by offering free University education (rather like Corbyn). Their party leader 'Jo' is a busy Mum with two young children and may appeal to those of a similar ilk.

Who votes Lib? Those who like to be seen as young, trendy, and adventurous. They are all members of their local 'Ramblers Association', and ride bikes to work.

Next come The Socialists. This lot spells serious DANGER. The Jewish Chronicle, Blunkett, Lummers, Blair, the Chief Rabbi, and even many of their present MP's, have declared Comrade Corbyn to be totally unfit for office. Vote Socialist and you vote for strikes, increased unemployment, increased taxes for the poor, and business closures. The Left are in the pay of the powerful Unions, and when McCluskey says jump, they jump. Never in their long and glorious history have the Socialists ever left power with either increased employment, or a better economy. It has always been thus, but their supporters couldn't give a fig. It has been estimated that Corbyn's election promises would cost £1.2 Trillion; that's £43,000 for every man woman and child in the UK (this may now have increased). Gargantuan irresponsibility on an unparalleled scale; not to mention McDonnell's recent promise of FREE fast fibre broadband for every home and business in the UK, costing an estimated further £100 Billion. I believe this could put 600 non-BT 'internet providers' (and all their employees) out of business. The loss of 'private initiative' jobs would be massive. Think 'Winter of Discontent', but much worse!

Who votes Socialist? Those who want something for nothing (obviously). They like to make placards, wear hoodies and masks, and throw bricks at anything that represents authority.

Lastly The Tories. They are generally regarded as the 'safe pair of hands' of British politics. We may not like their austere Good Housekeeping policies, but in the long term the whole country benefits from their prudent handling of the economy (as at present). It's true that they've made a total Pig's arse of Brexit, but they are not alone in that! If you want increased employment figures, and a strong economy; you are obliged to vote Tory. Having previously been considered an ogre, it seems as if Boris is once again in favour.

Who votes Tory? People with traditional values who live outside of London, in the countryside. The women wear headscarves, and the men wear tweed.

N B. Whilst we're in flesh-pressing, and baby-kissing, mode, wouldn't it be good to see a new law which insists on EVERYTHING contained in a party's manifesto being legally binding if elected, and any failures to enact policies within their term in office would be an imprisonable offence. Only that way will we begin to inject some credibility into electioneering.

p.s. Just for the record, my prediction is this. There will be a hung parliament, the Tories will do a deal with the Lib's, on condition that another referendum will be held. The people will then vote to 'remain' in the EU, I will have won €5, and Boris will continue as PM... I may be 100% wrong; we'll see.