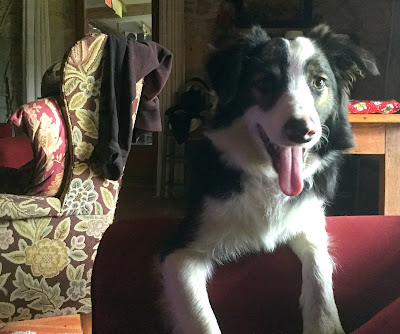 December 12th, and Billy is ONE year old today.

He arrived as a tiny bundle of fun, and has grown into a bigger bundle of fun. His fur is now thick and luscious, and he has all the attributes of a pukka Border Collie. All he lacks are the Sheep.

It's been a busy first year for him. He's eaten Lady M's cakes, slippers, and his own bedding; he's been kicked and had stones thrown at him. He's made a great new girlfriend 'Amie'. He's also punctured several balls, lost even more, and chewed a huge hole in a carpet...... A normal pup.

Recently he came across a very young Deer who was eating apples behind our pool's Pump House. They looked each other in the eyes, then went off to play together in the large field beyond. It was quite a sight. I imagined that like in some Disney film, the Deer would return daily and they would eventually become great friends, but no such luck. I was expecting too much, but their temporary antics will remain one of my best memories of his first year.

The children adore him, and little Mischa orders him around with great authority. They get on so well. He's a very typical Border Collie, and enjoys being told what to do!

So, it looks as if he's here to stay. There'll be some Beef for lunch today, followed by a long walk this afternoon. I hope he's happy with us; at least it's better than being with some of the nasty people around here. 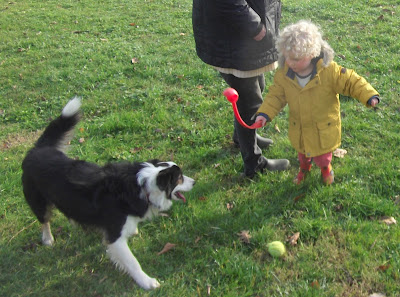 Here he is playing with little Mischa yesterday.