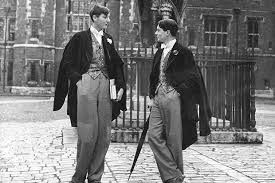 I've never had any desire to become a Rotarian or a Freemason, but I have unwittingly mixed in both circles.

During my brief stay in Shropshire in the early 80's, I was invited to Rotary Club, and Masonic, events on quite a regular basis. I was even asked to speak at a Rotary Club dinner.

I was once told by a senior Mason that people are never invited to become members; they have to 'make approaches' to an existing member. I have no idea if this is still correct, but I definitely felt as if I was being 'head-hunted'.

'Quasi-secret-societies' such as the Masons, Buffaloes, Rotarians, Druids, etc, have been around since time began. At my old school we had 'The Confessors Club' a Masonic style secret society named after old-boy Edward (I was not a member), and centuries later, alumni at 'Windsor Grammer' created their own version called 'Pop'; personified by the wearing of garish waistcoats (above). Such societies are not uncommon. In the USA I believe they all have various Greek letters as names, and indulge in bizarre initiation ceremonies.

These clubs are invariably male; women being far too sensible for such nonsense.

I wrote recently about being a member of the ICA, but I was also once a member of a political club; mostly for their cheap beer and the use of a very good Snooker room. Otherwise such focused clubs have never interested me. I suppose I'm simply not a club person.

p.s. Please tell me I'm wrong, but isn't that 'Pop' member above (on left) wearing patched trousers? Surely not!