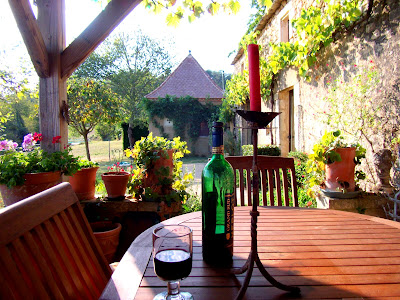 How many more balmy evenings will we spend sipping wine on the terrace. How much longer will the thermometer show temperatures over 25C, or even over 20C. How many more courgettes, peppers, or aubergines will we pick from Haddock's before they are all struck down by frost.

It's almost October already, and for some reason (age, probably) I'm feeling the advance of winter more than in previous years. I dread the approaching cold weather, and have even been drawing up a list for 'winter siege provisions'.

The lower temperatures also announce pool closure time, which we've been putting-off, hoping for that illusive Indian Summer. Next week I quite expect we'll be installing the winter cover; never a good moment.

On the plus side, I'm rather looking forward to taking my painting kit out into the leafless woods. It's been a while since I dirtied some canvas, and the urge is back .

I just wish I had a solution to my oncoming annual winter blues. I suppose the only real answer is a beach house in Bali, or somewhere similar. But until that time, I shall dream of thermal underwear, and April 2013.
Posted by Cro Magnon at 05:19