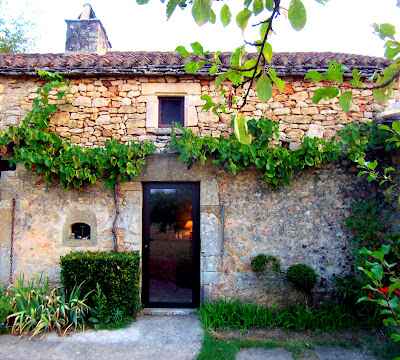 When I originally bought this tiny cottage, this bit is all there was. It was set in an open field, the roof was falling in, and, what door there was, was made from three roughly nailed planks of wood. There was one room down, and one room up; no water and no electricity. There was also a half-dead pear tree leaning perilously towards the house.

Inside was an earth floor, piles of dust-covered worm-eaten wood, and a huge open fireplace to die for.

The façade hasn't changed much. The door is obviously new, and the stone window to the left I cut myself, and installed, in exchange for a small open hole that let in no light at all. As you can see, the downstairs had no actual window.

I've cropped the photo intentionally, to cut out all the extra bits that we've since added, to show the tiny size of the original house. This is how certain poor farming folk lived 250 years ago. I believe that a family with several children lived in the cottage. Where they slept, I can't imagine. The little window above the door gives onto a 'granary', which was simply used as essential storage area; not for sleeping.

Of course the cottage has grown since I became the owner. To the left (where an attached barn had fallen down) is our kitchen, bathroom, and a bedroom; plus our infamous 'tower'. And to the right is my studio, an open air dining area, and the pool.

I've left the exterior stonework exactly as it was. It has a wonderful feeling of age, and to have pointed it (as so many do) would have destroyed it.

Having moved here from a large, imposing, and rather pompous property (400 metres away), there are those who might imagine that we've 'gone downhill'; In fact this is the friendliest and most comfortable house I've ever lived in, and the view from out front is second to none.

We have no desire to live in a large 'keeping-up-with-the-Jones's' type property ever again. Our tiny cottage suits us just fine (although it's actually much less tiny than it looks)!

With winter approaching, I wonder if you can picture a be-scarfed Cro, on a frosty evening, carrying an armful of logs through that door, throwing them onto the glowing embers of the wood-burner, then curling up with the dogs as he sips a glass of warmed rouge before dinner. Not far off now.