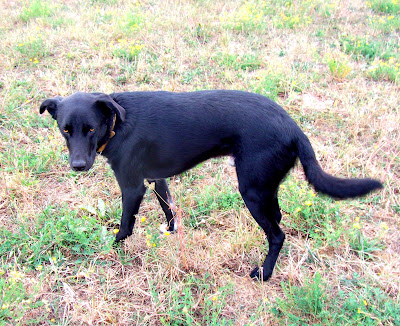 Bok really is a lovely dog. He's very friendly, reasonably well behaved, and appreciative of everything.

He's just a black dog Canus Canus Vulgaris (Negra). He has no pretensions above his lowly station, and apart from those evil orange eyes (do enlarge photo), he is really quite elegant. His coat shines, and he has boundless energy. He has also nominated himself as MY dog, and hardly leaves my side. When I sit, his head is instantly on my lap. And if I secretly give him some tasty morsel below the table, he takes it with pure finesse (Monty takes several fingers).

On the negative side, he still has urges to run after cars, and if the horses run, he's after them at once. It's the Border Collie in him that makes him want to tidy up.

He's been with us for just over 8 months, and has settled in really well. He and Monty are still 'best friends', and I imagine they will remain so for life. He has a good bark, and lets us know at once if anything is happening outside.

I should add that he's not all black, he has some white on his undercarriage, and two very nice small white gloves on his hands; although the photo above manages to hide both.