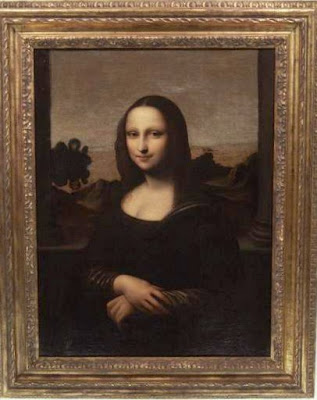 The big news in the art world is that yet another long-lost (or wrongly attributed; ahem) masterpiece has recently been discovered languishing unloved in some outdoor privy  This time not just any old picture, but an early version of The Mona Lisa by the great Leonardo di Caprio himself. 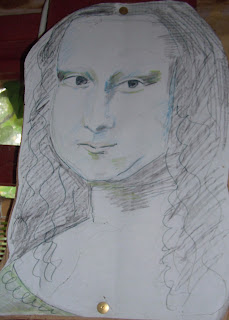 We originally thought that this other recently discovered version (above) was by my daughter Tenpin, but having shown it to several antique-dealer wide-boys, we now understand it to be the original sketch for the early version (top) of Maestro di Caprio's much later Mona Lisa masterpiece (not shown). Well, you can see it, can't you; it's the way the eyes follow you around the room.

I shall be heading for Bond Street within the next few days for a valuation. So expect a new blog entitled Magnon 'In His Newly Acquired Chateau' Meanderings before too long.

Maybe a small Caribbean island would be nice too....