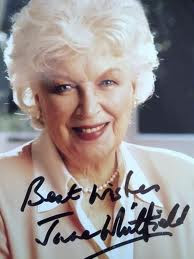 Dear June Whitfield; she has accompanied me through life like a proverbial well fitting overcoat.

I first discovered her at the age of about 6 or 7, when she played the part of Eth Glum in the radio comedy 'Take it from Here' with Jimmy Edwards (I thought this was hilarious); since then she's appeared in the most amazing variety of shows on stage, screen, and radio.

She's worked with Tony Hancock, Dixon of Dock Green, Arthur Askey, Benny Hill, Steptoe and Son, Frankie Howerd, and appeared in several 'Carry On' films. She was also in Terry and June (obviously), It Ain't Half Hot Mum, Minder, The News Huddlines, Midsomer Murders, Last of the Summer Wine, Coronation Street, Dr Who, and, of course, Absolutely Fabulous.

I've missed out loads I'm sure, but for those of us brought up on a diet of English Radio and TV, there can be no other actress to compare with our National Treasure, June.

Ms Whitfield is now 86, and still working. Look out for her in 'special editions' of Ab Fab; there's plenty of life in the old gal yet!