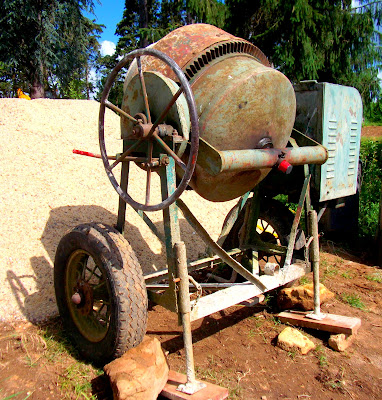 This fine old concrete mixer has just appeared on the edge of our land, where my neighbour (yes, that one) is just about to start work on restoring his 35 year old pool.

It used to be one of the most beautiful pools in the area.  It was properly landscaped, with stone walling and an interesting selection of unusual trees and plants. Unfortunately it fell into slight disrepair, but is now being completely re-vamped. We are even to have a new exotic wall between his property and ours (I shall post pix later), and the machine is there to provide the foundations.

But back to the mixer. It has its original wire wheels, and, compared to modern mixers, is amazingly solid. 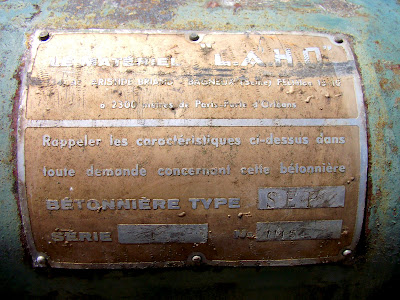 For the purists amongst you (if any), apparently it's a LAHO Betonnière Type SEP. Series 1. And it proudly announces that it was manufactured just 2300 metres from the Porte d'Orleans in Gay Paree. It also has a 'Bernard' motor, which is a pleasure to hear fire up (at first pull of the cord). I have no idea how old it might be.

I bet there's a few (especially women) out there thinking 'What the hell's Cro doing, posting a picture of a concrete mixer'. Well I just happen to think it's rather a nice concrete mixer. I'm also ecstatic that my neighbour (yes, that one) is finally doing something about the bloody mess he's made all over OUR LAND.