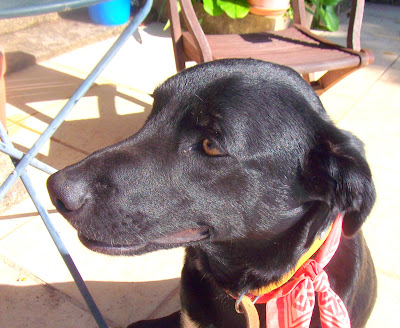 Bok is 18 months old today. He's not the world's most handsome dog; he's just a DOG (for full impact, do enlarge picture).

He has strange looking yellow eyes, a beautiful sheen on his coat, and he's so fast he can almost run-down a hare. He is also very adept at playing 'Cato' to Monty's 'Clouseau'.

We think he might be half Border Collie, and half Greyhound; but we're not sure. He is very affectionate and reasonably obedient. Having had three different homes, he's also very happy to have found one that is permanent, and he tells us as much.

We adore our little Bok, and so does his brother Monty. What would they do without each other!