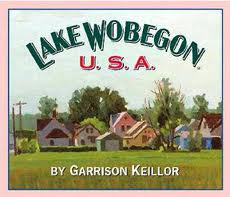 I am an insomniac, and at night I often lie in bed, with an earphone stuck in one ear, listening to the radio via my satellite TV.

I listen to various stations, but one of my favourites is BBC's Radio 4 Extra. They broadcast old comedy shows, as well as some pretty good classic serials.

In recent times I've turned on, and found myself listening to a show called 'Garrison Keillor's Radio Show'; a bizarre American concoction of aimless chatter and dreary Country and Western wailing.

Am I supposed to laugh somewhere? Is it supposed to be serious? Have I missed some important point? I'm baffled!

Has anyone else come across this strange programme? There are often bizarre reciprocal arrangements between international TV and Radio stations, so I imagine the BBC were forced to take this one in exchange for one of theirs. Even so, I can't understand why it's on Radio 4 Extra; it doesn't seem to belong there (or anywhere, really).