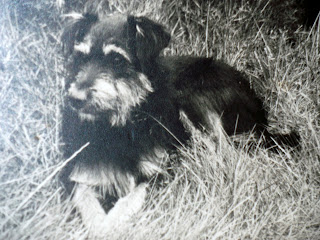 Hamlet was my first dog; the only one to have shared my life prior to Monty. And what a dog he was!

Hamlet came from Yorkshire, where he was bought by some friends at Leeds Market for 10 shillings (50p). For a while he went to live in London, but he ate their shoes when left alone, and was transferred to Surrey where I first met him.

His owners had several dogs at their rambling country retreat and, when fed, poor Hamlet was last in line. The existing dogs rejected him, so they decided he'd have to find another home.

I took him for a long walk one day, to see how I felt about taking him, and decided almost at once that he and I belonged together; on returning to the house I said 'yes'. Unfortunately, on leaving (I was going to pick him up the following day) he suddenly ran out in front of the car and I ran over his front left leg, making a perfect break. Unfortunately again (for him), there was a postal strike at the time, and the Vet' was unable to get the right size plate, so used an oversized one instead. Poor Hamlet's foot for ever pointed outwards, and he had already cost me about £100.

He lived in Wales for a while, then came with us to France. He loved it here.

Hamlet was just a scruffy, medium sized, black-n-tan, 50p mutt; but he was adorable. He died about 30 years ago, and I still miss him. He was possibly the best dog in the world (apart from Monty, of course). I still keep his photo at hand.
Posted by Cro Magnon at 06:22