I suppose I must have half-inched a few things in my time; a pencil here, a book there. But I've never been what one would call a 'thief'; I could no more break into another person's house, or steal a car, than I could strangle my own grandmother.

However, I have occasionally suffered at the hands of other people's stealing. I remember, when quite young, going into a toy shop with a much older boy who surreptitiously stuffed something into my pocket. He left the shop first, leaving me to get caught with his swag in my possession (I didn't even know what it was). No matter how hard I tried to explain to the shop-keeper, he gave me a good ticking-off. The other boy (who'd been waiting outside) thought the whole incident a big joke.... I didn't.

Luckily I've never had my home burgled, but I've had plenty of paintings stolen; mostly (I'm saddened to say) during my college days, when I'm sure the culprits were my tutors. I've also sold things for which I've never received payment; this in my mind is also stealing.

This posting has been prompted by a postcard I recently sent to a friend. It was of a simple drawing I did back in 1993 of the 3 houses in my tiny hamlet. It was a semi-aerial view, with the area around the houses having been compressed, in order to fit them onto a small piece of paper. 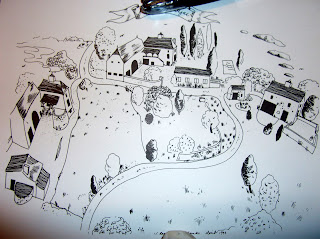 At the time, I gave a photocopy of the drawing to a neighbour, as I thought their young daughter would enjoy colouring it in. However, I was not expecting them, some weeks later, to give me back a handful of printed post-cards (of the self-same drawing), complete with their own stolen 'COPYRIGHT' on the address side. They seemed to think I would be delighted by such a gift.... I don't know how, but it was amazing that I managed not to go directly to my lawyer.
Posted by Cro Magnon at 05:25