The Sunday Curiosity: No 1. Eruv. 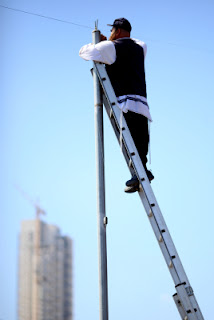 Most religions of the world have their little quirks; some go in for mock-cannibalistic rituals (drinking blood and eating flesh), some throw live animals off high cliffs to appease their inhumane 'gods', and others dance around, tempting death by putting poisonous snakes into their mouths; but Judaism must have one of the most bizarre.
All major cities in the western world have large Jewish communities. In general they are hard working, honest, and respectful people, who require nothing more than to be left in peace, and get on with their work. But, as their religion prevents them doing certain things on a Saturday, they have had to find a solution.
So, they string up a length of aerial wire (the eruv) around their most populated areas, and within that area the rules no longer apply. Within the 'wired' area they may 'Move an object from an enclosed area (i.e. their home) to a major thoroughfare', or 'Move an object from a major thoroughfare to an enclosed area', or, if they're really adventurous, 'Move an object of more than four cubits around within a major thoroughfare'.
That simple encircling length of wire, magically allows them to ignore the rules of the Torah... A bit like Christians crossing their fingers behind their backs, as they ignore the 10 commandments.  Ain't life/religion wonderful!
If I find anything even more bizarre, I might post a 'The Sunday Curiosity No 2'.
Posted by Cro Magnon at 05:43