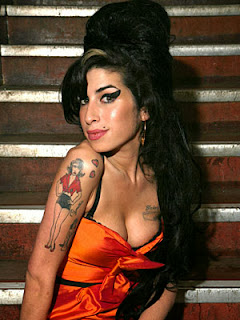 I was looking through a list of those who'd left us in 2011, and was surprised by how many 'rappers' had either died of drug over-indulgence, or been murdered. 'Rap' is not my favourite music (in fact I would say it's my least favourite), so their names mean nothing to me. But, even so, very sad to see all those with names like Gang-star, Murd-rah, Thuggo, Gucci-Woochie-Gold-Chain, and MC Fatso, all having died so young.

Lucian Freud, Peter Falk, Liz Taylor, Jane Russell, and my old friend Jet Harris were amongst this year's Roll of Honour, but for me the saddest name to see on the list was that of our National Amy Winehouse.

All of the above have left behind testament to their talents. Movies, paintings, and music; but poor Amy had only just begun. She had so much more to offer.

I was a late arrival to her music, seeing her firstly one New Year's Eve, on Jools Holland's TV show; she was brilliant. I was instantly taken by her, she had true unquestionable genius.

So, I say goodbye to all those above; I'll miss you, especially Amy.