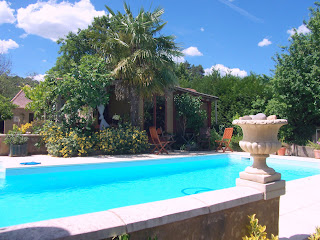 When we opened the pool this year, not only was I slightly (totally) incapacitated, but the water was also pretty filthy. However, I never really worry about such things; they're usually soon fixed.
Much more important was the fact that some bloody mouse had taken up residency in the electrical control box, and effed-up the works. But Bertrand, my electrician, soon had it all working again.

The flagstone area around the pool (amusingly know as 'the beach') is always dirty and stained after its winter sojourn spent under the tarpaulin, but this is also soon remedied with copious amounts of diluted bleach and a stiff brush.

The water itself receives a massive shock of fast-disolving chlorine, which makes it instantly sparkle again. It's just a shame there isn't something I could do to raise the temperature of the water; even after all this hot weather, it's still only 20 C . Kettles of boiling water perhaps?

In my present condition it (unfortunately) fell to Lady M, this year, to vacuum the bottom, and brush any green algae from the sides; both of which she did perfectly.

By the way; that's my studio behind the table and chairs. Well, some of us have to work hard!

p.s. I wonder if there's an olympic swimming category for one-armed breaststroke; I'm getting quite good at it!