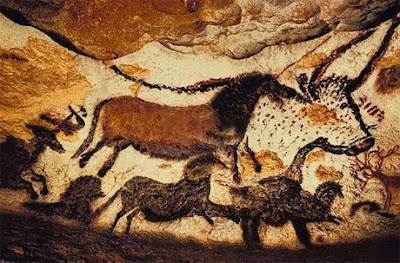 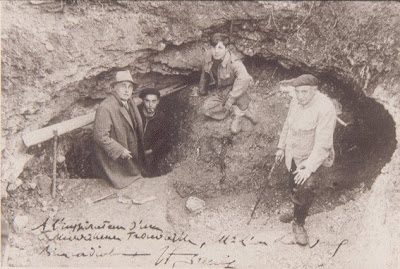 The magnificent caves at Lascaux (just to the north of where I live) were discovered in September 1940 by four teenage boys, Marcel Ravidat, Jaques Marsal, Georges Agnel, and Simon Coencas; as well as Marcel's dog 'Robot'.
Now; imagine that you'd been around 17,000 years ago, and you'd been invited to a shin-dig at the Lascaux 'artists colony'. I reckon you'd have been impressed enough with the décor to try to reproduce something of its glory in your own cave; n'est pas? I certainly would have!
And, of course, that WAS the case. Smaller, less flamboyant, painted caves are still being discovered to this day. Recently, in a village not five miles from our house, yet another was discovered and on account of the problems encountered at Lascaux, was immediately closed up again under a shroud of secrecy.
Who knows how many others are still to be found. How many more 'Robots' will force themselves through tiny openings to discover 'wonderous things'. How many are already known of, but their wary owners keep quiet.
Stories abound in southern England of farm labourers ploughing up pieces of Roman mosiac, only to be told by the boss to 'keep ploughing, and keep your mouth SHUT'. It's OK for some government dep't to commandeer a few acres of someone-else's land, but if it's YOURS; the idea may not be quite so appealing!