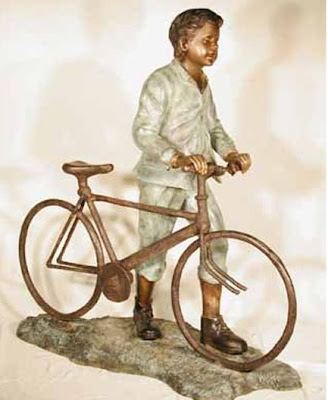 For some reason I've been thinking a lot recently about my childhood; and, frankly, it was OK.

Occasionally I moan, because at school I was whacked A LOT for doing plain ordinary 'human' things (hand in pocket, eating a sweet, being late for dinner), but I didn't really mind (other than the inconvenience of temporary buttock-pain), because it seemed as if it was THEY who had got things wrong, and THEY would eventually understand. Otherwise, outside of school, I had perfect freedom.

I'm not much of a fisherman, but I've always liked the idea of fishing. When I was about 5 or 6, I had a small red bicycle, a bit like the one above but more bijou. It was plain, had no gears, and was a little rusty (my mother had bought it second-hand); but I loved it. On sundays I would often get up early, make some tuna flavoured flour paste (it was rumoured to drive fish crazy), and head off, with my ten-bob fishing rod attached to the crossbar, to a small pond that belonged to a Farmer Bell; a friend of my father's.

This pond was about 6 or 7 miles from our house and I would just go off by myself. No-one fussed, no-one worried, and no-one expected me back at any particular time (I didn't have a watch anyway).

Nowadays this would be unthinkable. And when I look back, I suppose it should have been unthinkable then. Not only was every part of my trip hazardous, but I suppose my mother was slightly irresponsible in simply letting me go off like that (I know she'll forgive me for saying so).

But that's how we boys were, and if our mothers had known half of what we got up to, they would have been horrified. We did very dangerous things. We climbed precarious trees, we threw ourselves off rocky crags into disused water-filled quarries, we made unstable bombs out of copper tubing and weed-killer. Health-n-safety had yet to become the Socialist's battle cry, and children were still able to have proper childhoods.

We've come a long way since my sort of upbringing, to the angst of today. Nowadays you can't even take a photo of your own child in his or her school play, without some goody-goody clapping you in irons. I know which version of childhood I prefer.