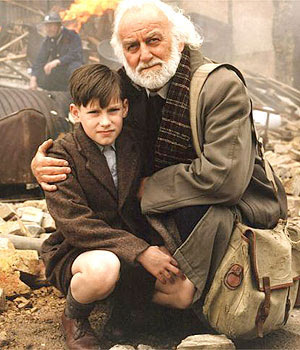 If you haven't seen the fim version of 'Goodnight Mr Tom', starring John Thaw as Tom and Nick Robinson as the boy William, then you should do so at once.

The film tells the tale of an evacuee during the second world war. I shall say no more; other than you will need a box of tissues. I get quite upset even looking at the picture above!

My parents took in an evacuee. He was with them in their small Surrey village (Lingfield) for most of the war. One day he returned to his parents, and was never heard from again; my mother was, quite understandably, very upset; the boy had become one of the family.

After my father died I sent quite a few old 'local history' photos back to Lingfield's archivist; a Mrs Margaret Whiting. She wrote back to thank me, and mentioned, in passing, that she too had been evacuated to my parents, until her own parents had quit London and decided to settle in Lingfield themselves. I'd had no idea.

I asked Mrs Whiting if she remembered the boy who had been with my parents, but it seems he had gone by the time she'd arrived. I also (rather cheekily) asked her if she'd been well looked after; she was able to confirm that she had.

N.B. Just in case anyone out there does not know about 'Evacuees', they were children sent out from London to avoid the bombing raids during the last war. Some were mistreated, some were used as unpaid labourers, but mostly they were well looked after by decent families (such as my own).
Posted by Cro Magnon at 06:03