I noticed some time back that a fellow blogger said that she had been accused of being 'Arrogant'. I have never known her to be so; opinionated maybe, but I presume we all are. That is why we write; to express our opinions.

Before I continue, let me give you what I think is the best description of the word 'Arrogant'. i.e. 'Exaggerating, or disposed to exaggerate, one's own worth or importance, often by an overbearing manner'.

When I 'Googled' the word, and read this description, I immediately thought of 'Parisians', who perfect arrogance from an early age. Their Mother's milk is diluted with arrogance; they thrive on it, and take it to new heights. Those who go on to study Arrogance at college usually end-up as bureaucrats, Doctor's receptionists, or bank clerks, where their attained skills lead to regular promotion and riches. They are admired for their arrogance. Now go back to Google's description, and you will see what I mean. It fits them perfectly. 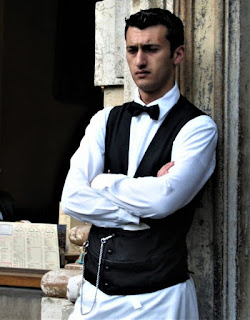 The humble Parisian waiter is a perfectionist in the art. If you can leave a Parisian eatery without feeling humbled and worthless, you have found somewhere to treasure. Why anyone who brings a coffee to your table should feel so bloody full of themselves, and dismissive of all others, I really don't know; but they do! Even the French Government recently tried to change them, but failed.

Some of the arrogance I have encountered is hard to believe; almost as if it was devised by some comedy script writer. So outrageous was it, that one almost laughed.

I shan't give multiple examples here, because they needed to be witnessed first hand in order to appreciate the full impact. No, I will give just one.

Someone once openly stole the copyright to one of my drawings, and when I mentioned it, his son told me that I'd insulted him. Yes, I'D insulted HIM because HE'D shamelessly stolen MY copyright. A small example, but focussed enough to show how crazy these people can become without feeling at all embarrassed. Whatever you've done, always blame others.

Arrogance, pomposity, and insolence, are possibly my three most disliked human traits. Being kind, humble, and well-mannered, costs nothing and are endearing qualities that we (but mostly the French) should embrace. Do I see it happening? Of course not!