In the propaganda race, there is no question that Labour are winning! For some bizarre reason the Tories don't seem to have an equivalent propaganda department in order to have a poke at the left.
Take the recent bit of nonsense in the UK. Starmer (the leader of the Left) has been going on and on about Boris and his garden meeting with cabinet colleagues (below), for weeks if not months. It was as if it was the only thing that mattered in the UK. Bugger Covid, Ukraine, or the nation's Employment figures, it was Boris's outdoor meeting that's got his goat. I suppose he imagined that as the leader of one of the world's most powerful nations, he should simply have gone to ground, and done nothing until the Covid panic was over.
No, Sir Keir, you fail to understand that the wheels continue to turn and the country needs to be under constant control and guidance. That isn't done by isolating yourself; even if you'd advised others to do so. Sadly you will never really get to understand that as you have little chance of ever becoming PM. 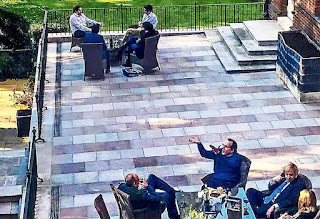 But of course, as we all know, Starmer himself was no stranger to parties during the period of lockdown, and rather than holding well distanced meetings outdoors in the fresh air (as did Boris), he held them in tiny enclosed rooms in Durham. He here is (below) swigging beer from a bottle with his chums.
Why the Tories did not press for him to be fined (as was Boris), I have no idea. We can only imagine that the Tories have better, and more urgent, things to do, than fussing about such trivialities. However, I don't think that Starmer is out of the woods quite yet! A similar fine for him and his chums would at least make the whole affair a bit more balanced. 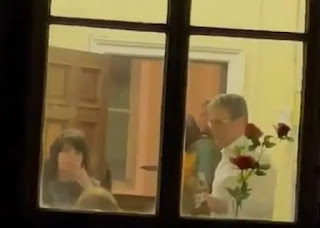 Why there should be one rule for Labour, and another for The Tories; Starmer has yet to explain.
Posted by Cro Magnon at 04:14