Could you repeat that please..... slowly!

This short letter (below) recently appeared in last Sunday's paper TV section, amongst the readers' comments.
I think the writer either has a huge chip on his shoulder, or is simply missing an obvious point. Why they printed his letter I really don't know! 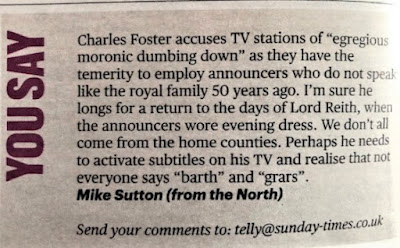 Personally I love regional accents, my favourites being Welsh, West country, and Norfolk. Some others, it's true, I'm not so keen on. However, certain accents are less suitable for Radio or TV than others.
The whole point of language is 'communication', and if an accent is so strong that one can't understand what is being said, then it is of no use on TV. Some Newcastle, Liverpool, or Glasgow accents (there are others) are almost impossible to understand, and their speakers take pride in making them so; treating them almost like a regional Patois; purposefully unintelligible to outsiders. Also, certain ethnic groups have developed a coded version of our language that is intended to exclude outsiders. This too would be hopeless on a News programme.
Mr Sutton should not be trying to make this a question of North/South divide.  It is a question of clarity and diction, rather than of 'class'. Speak your own version of English amongst your family and friends, but don't expect the whole country to understand you if you're reading The News on the BBC. The Northerner who cannot understand a thick Cockney accent would never be accused of 'coming from the home counties'.
Halfway through writing this, I received a phone call from an Indian woman who was trying to scam me about my Internet connection. I could hardly understand a word of what she was saying, and after my traditional greeting for such people, I put the phone down. In the same way, someone with a very broad equally incomprehensible Geordie accent on a National News programme would receive the same treatment, and be turned off. This is not some snobbish North/South action; it is a natural reaction to something we literally cannot understand.
However, Mr Sutton is right about one thing; I suspect we might need subtitles to understand HIM (from the North).
And here are the following day's comments about Mr Sutton's complaint. I think they all have it absolutely right! It's all about CLARITY Sir, not North and South. 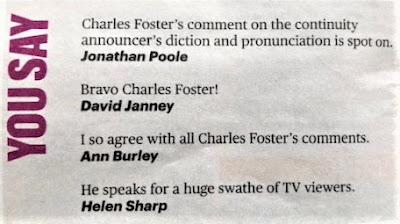 Bravo Charles Foster indeed (I hope he reads this; whoever he is!).
Posted by Cro Magnon at 04:22