Your (My) Mum's cooking.

Some will have bad memories of their mother's cooking; for others it would have been a pure delight. My own experience was somewhere in the middle, but certainly edging towards delight.

My mother's arsenal of recipes was very much post-war-frugal. We still had rationing when I was small (even though there were ways around such things), but as we had a very good sized garden there was plenty of room for Chickens, Bantams, and occasionally Ducks or Geese. We had a good selection of fruit trees, nut bushes, and vegetables. And we also had 'Fuller' who did all the hard work. 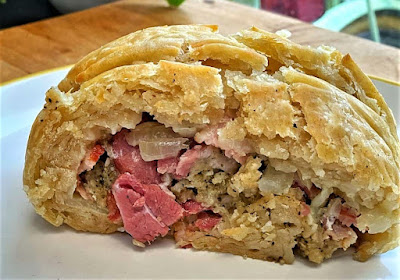 I can't really remember much of my mother's early cooking, other than a bacon, onion, and sage roly-poly (also known as 'Clanger', above) which I loved. It was stodgy, filling, and delicious. It was a steamed savoury suet pudding, that really filled the belly, and was always accompanied by a good dollop of freshly made Colman's Mustard. I once tried to imitate it; and failed.

When I was about 7 or 8 my mother discovered Elizabeth David, her Mediterranean Food book was a revelation to post-war Britain, where she taught English cooks how to use a few herbs or spices to jazz-up otherwise plain meals. It was a different way of thinking about food, and my mother tried her best to put into practice what she had learned.

We ate a lot of Beef joints in those days; I think they must have been cheaper, and more available, than Pork, Lamb, or Chicken. Big pots of pukka 'dripping' were always available in the larder.

One of her favourites from the Elizabeth David book was a Chicken Casserole which was cooked with Chopped Tomatoes, mushrooms, black olives, and cider. It always had Bay leaves in it, but I'm not sure what else. Every time she made it, it became better and better. I still make it today.

My mother also made a stonking good Chocolate Cake. My task was to do the squiggly lines in the icing with the back of a fork. I'm still an expert.

She was a plain-ish cook, but with pretentions. Whenever she travelled abroad, she always returned with strange exotic ingredients in her suitcase; some were good, others just looked good. I do remember a small tin of 'Thrushes in Sauce' which (as one might expect) came from Spain. We all came to the conclusion that the poor Thrushes would have been better left alone!

I only remember my father ever making two things. Firstly he very occasionally made Curries which contained banana, and secondly he once produced a large batch of Piccalilli. Both were very good.

I was trying to think of some recipe that I would ask my mother for, if she was still here; but I couldn't think of anything. Maybe like most children, I probably view my mother's cooking through rose tinted glasses.