We watch the BBC's 'Repair Shop' TV programme when we can, and Lady Magnon is constantly suggesting that I should take Alphonse along. I, of course, reply with an emphatic "No". I like him just the way he is! 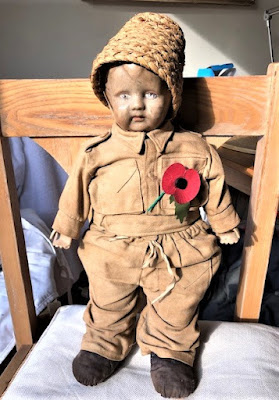 Alphonse and I have been together for all of 75 years. My mother won him in a raffle, at a rather posh Red Cross Ball in Park Lane towards the end of the war.
He is supposed to represent a Japanese Prisoner of War, for whom I imagine they were raising funds. He wears a straw hat, and has straw shoes. Otherwise he wears very simple (home-made by someone) Khaki Army Fatigues. The Poppy was an addition for last year's Remembrance Day. Poor Alphonse (like me) is showing signs of age. His body is cracked and scarred, his uniform certainly wouldn't pass an inspection parade, and his eyes no longer see as once they did (cataracts maybe?).
Goodness knows what will happen to him when I'm no longer here. I don't wish to burden my children with loads of 'heirlooms' which I'm sure they wouldn't want. Maybe he should be buried, or cremated, with me; although it would be rather a shame.
To most people he's just a doll in uniform; a forerunner of Action Man. But to me he's almost a family member, a sort of brother or cousin who doesn't argue, and not only agrees with my every word but also does what he's told.
He's not cuddly or cute. I never took him with me during my rare hospital stays; but I would hate to think that he wasn't somewhere at hand. We don't really speak to each other; just knowing that we're in easy reach of each other is enough.
I've brought him downstairs to share my sofa. I just hope that Billy doesn't take Umbrage.
Posted by Cro Magnon at 04:18