Where's the help when you need it?

Ours is a quiet street; very little happens. So it was unusual the day before yesterday to find a distressed young man sitting on the steps that lead up to our house; right beside the sign that boldly says 'Private'.
Lady Magnon was the first to find him. She asked if he was OK, and received very little response. Some while later we noticed that he was still there, looking very confused. 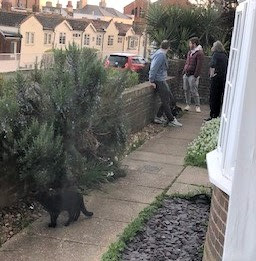 That's him in the middle of the photo being 'helped' by Lady M and our neighbour Max (and watched by 'Pigeon' the cat). They couldn't get anything out of him; he seemed to be in a Zombie state, and didn't reply to questions. He looked 'normal' enough, but something was definitely wrong. I imagine he has 'Mental Problems'.
We really didn't know what to do. It wasn't a 999 case, and we didn't wish to make too big an issue of it. He wasn't violent or noisy; just mentally and physically 'lost'. Quite possibly as a result of something he'd 'taken'.
Eventually I phoned a police 'non urgent' number, and spoke to a nice lady who was sympathetic but not too helpful. She suggested I phone the Ambulance service if he looked in need of medical help. I followed her advice, but was told that if it wasn't an emergency, they could do nothing. It seemed as if cases such as his are low priority, and of no concern to any of the main services.
As night fell (along with the temperature) Lady M took him a mug of Tea and a Bacon sandwich; he seemed grateful. I believe others from the street have also spoken to him without response; although someone did discover that he's called Nick. Another resident loaned him a blanket and scarf. Our street's WhatsApp group soon rallied round.
This is not your regular 'rough sleeper' with a dog on a string. He is well dressed, clean, coiffed, etc; he just seemed totally lost and sad. I hope he feels that at least someone cared enough about him to help a bit. It's such a shame there there are no agencies who are willing to help someone like him. 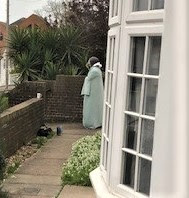 P.S. He was still there the following morning (above), wrapped in the blanket that some kind person had loaned him. I spoke to him and asked if there was anyone I could contact on his behalf, or if there might be someone who's worried about him. He replied 'no' to both questions. The poor man looked frozen.
Not knowing what more we could do, I phoned the local 'Homelessness' people, and left the matter in their hands. A very sad state of affairs. At 9am an Ambulance came and took him away. Someone in Government once had the bright idea that all 'Mental Homes' should be closed, and that 'Care in the Community' would replace them. This is the result.
I just hope he's now getting the help that he so obviously needs.
Posted by Cro Magnon at 04:26