Who would have thought....

I have three children (that I know of); two boys and one girl. They arrived boy, girl, boy, just as ordered.
The only one I see regularly (and I shall soon be seeing even more regularly) is my oldest, Kimbo. He is the one who opens Supermarkets, and flies off to Singapore on business. He is a bon viveur and is great company.
The other two are globe trotters; one a settled globe trotter.  My daughter, Tenpin, below aged about 12, has now settled in Brisbane. She has a beautiful home, a good job, two strapping teenage boys, and two dogs. As you might imagine, she is amazingly busy, and hardly has time to sleep. 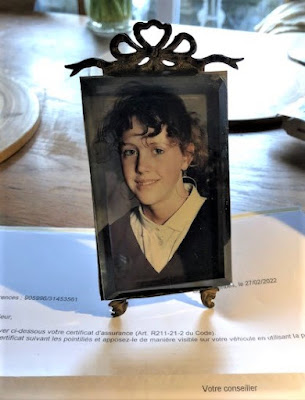 My youngest, Wills, is the itchy feet member of the family. There is nothing he likes more than new horizons and opportunities. He has recently left his small Caribbean island, and is back in Miami. I believe he will head for France in a month or so, and maybe stay for some while. I hope he'll still be there when we go. He also has other homes around the world. We never know where he will settle next.
I suppose we like to ascribe future paths for our children, but rarely do they happen as imagined. They have several University degrees between them; my oldest has just the one, my daughter I think has two (Ordinary and Masters), and my youngest seems to have several. None of them work in the realms of their degrees.
Now we look to the grandsons; of which we have six. Kimbo's two are in the process of planning their futures, seemingly quite wisely. Tenpin's two are probably also planning careers, but we have no information, and Wills's two, Boo Boo and The Cherub, will of course become World Leaders.
We still dream. The one thing I shall miss about leaving this life will be not knowing how things unfold for them all. One thing I do hope, however, is that they'll all be successful in their choices of career, solvent, kind, and happy. But that, of course, is entirely up to them.
Posted by Cro Magnon at 04:26