Bury, in Lancashire, is the UK's spiritual home of the Black Pudding. Why they claim it as such, I know not.
I'm quite a fan of Black Pudding, and often eat it for breakfast. My usual supply comes from M & S, in packs of four large round slices. It is delicious.
I recently bought some from Waitrose's deli counter, and I'm relieved to say that Billy really enjoyed it; I DIDN'T. It was described on the pack as Bury Black Pudding. Maybe they meant 'Bury this black pudding'. 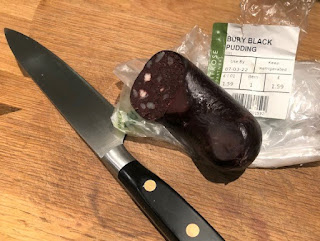 I really think the Bury Chamber of Commerce should have a word with whoever is supplying Waitrose with this travesty of a Black Pudding. It tasted, and had the consistency of, CARDBOARD (not that I have ever eaten cardboard). It was tasteless, had a horrible texture, and was a 100% disappointment
Billy, who is less fastidious than me, enjoyed it, but he'll never have the opportunity to enjoy it again.
I think the good people of Bury should take to the streets, and protest. Nothing I can think of could give a worse reputation to the fine town of Bury, than this dreadful excuse for Black Pudding. Be warned!
p.s. At the same time as buying this dreadful sausage, I bought a large Waitrose hand-made Pork pie. I'm pleased to say that it was one of the best I've tasted.
Posted by Cro Magnon at 04:26