We used to worry about Covid-19; but that was over a week ago. 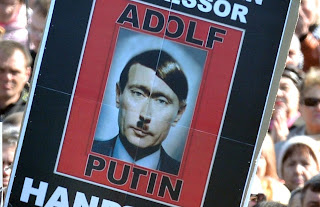 Putin has now warned Kyiv civilians to "Leave or Die".

Under the Geneva Convention (rules of war), it specifically states that one should never target those who do not take part in hostilities; i.e. civilians. Women and children in particular. Sadly Putin has joined that long line of evil despots who rule by fear, and he's not afraid to demonstrate as much by widespread slaughter. To warn those very civilians that they must 'leave or die', is in itself a declaration that he intends to commit such war crimes. Those of us who thought that Europe would never see another Hitler have had to think again. Putin is on the rampage, killing, destroying, and even imprisoning children.

We already know that Putin's forces have targeted residential apartment blocks; the evidence is there for all to see. The bodies of innocent civilians are lying on the streets of Kyiv and elsewhere.

He must not succeed in this evil. He must be made to pay, this is too outrageous a crime for him to receive anything less than the ultimate penalty.

It would also be good to hear apologies from Putin's disgusting supporters. Countries such as Cuba, Venezuela, N Korea, China, etc, should be ashamed of themselves, along with those who support their evil regimes; especially those on the opposition benches at Westminster.

NATO and other friendly countries who are against what Russia (Putin) is doing, are still being over-cautious. Hitting their financial markets may affect Russian citizens, but it will hardly halt a blood-thirsty maniac.

When Argentina attacked the defenceless Falkland Islands, Mrs T sent a 'Task Force', and gave them a bloodied nose. Isn't about time NATO and her allies did something similar with mainland Russia?

Why is it that the Communist countries are always the ones who are at odds with the peaceful world? Maybe a few bombs on Moscow's finest buildings might make Putin think again! It's what HE'S doing elsewhere, so he could hardly complain!