I believe that the BBC's afternoon quiz programme called 'Pointless', is H M The Queen's favourite.
It's a mid-intelligence game; no complex high-IQ questions, no trickery, just general knowledge (or guessing) on a variety of subjects.
Recently (9th March), there was such a SHOCK in the Magnon household at one particular crass answer, that we almost spilt our cups of Lapsang. A couple (one of whom was a doctor), thought that NORTH KOREA was a member of THE COMMONWEALTH.
The question had been to name a country who took part in the 2014 Commonwealth Games; the answer given, North bloody Korea!!! 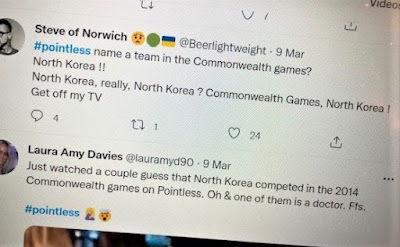 I do hope that H M wasn't watching that particular episode (I wish I hadn't myself). To think that some doctor sitting in his surgery might know nothing of N Korea, is really quite shocking.
What has education come to? Too busy with gender studies and Wokery I suppose. If our teachers can find the time to tell children that they must no longer refer to their parents as Mum and Dad, but as 'the people who care for me', then surely they can find time to explain that N Korea is an evil Communist State, and NOT a member of The glorious Commonwealth.
Posted by Cro Magnon at 04:16