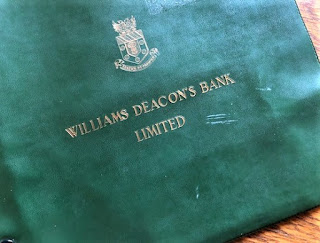 Banking ain't what it used to be.
This wasn't my very first bank account, but it was the first that I'd set-up by myself, and had total control over. My salary went there, my rent was payed from there, and it allowed me to live a totally independent life in London. I must have opened this account in 1964.

Williams Deacon's had the feel of a private bank about it. My branch was in Cheapside, in The City of London. It had a commissionaire at the door, the interior was oak panelled, and there were very comfortable leather seats for clients to relax in. The tellers all wore classic City-Style dark jackets and striped trousers, and I'd actually been interviewed (interrogated) by the manager before being granted an account; they didn't want any riff-raff. It was also a 'non clearing' bank, which meant that one had an extra day or two before a cheque cleared.

When I received my first cheque book, I was very pleased, and rather amused, to see that I had become an 'Esq'. This has remained ever since, which I shall explain later. Flattery works wonders!

Sadly Williams Deacon's didn't last, and in 1970 it became Williams and Glyns. Williams and Glyn's in turn then became Royal Bank of Scotland in 1985, and since 2020 it's simply a part of the giant NatWest Group. It hasn't improved. The only thing that has outlived all the changes is that I'm still referred to as 'Esq' on my cards and cheques. Regardless of all this upheaval, I have somehow remained faithful.

My current branch has now closed. The last time I visited there was simply a reception desk, and a few small office cubicles, if one actually needed to speak to someone (and if they were available). I'm not sure where my new branch is.... they haven't told me!

In France banking is even worse than here. Add serious French arrogance to the lack of personal service, and you'll understand what I mean. You are made to feel as if YOUR money belongs to THEM, and how dare you ask for any. Even putting cash IN is a nightmare. They look down on their clients as being no more than an unnecessary inconvenience; or worse.

When I think back to Williams Deacon's it seems like a totally different age. The Commissionaire would raise his topper as he held open the door for me, the tellers all referred to me as 'Sir', and nothing was too much for them. I know such things will never return, but it would be lovely if they could.