Who runs this place?

They used to be known as Boots the Chemist, but now they're known as just plain Boots; probably for good reason.
The Boots store in central Brighton is BIG. It's on two floors, with each floor covering an area roughly the size of a Football pitch and stands.
Downstairs is given to perfumes, make-up, and over the counter first-aid and chemical things; then stuffed into the far corner is the tiny Pharmacy (below). 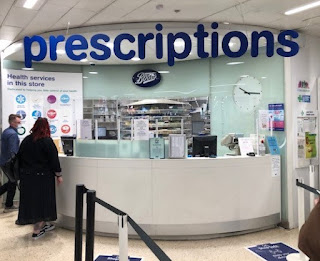 The small town near my home in France has a population of about 700, and the Pharmacy is modern, efficient, and friendly. Brighton has a population of about 290,000 and this particular central Pharmacy (there are others) is tiny, inefficient, old fashioned and slow. Dare I say it, but the staff are mostly 'foreign' and they can also be very difficult to understand.
Whilst a huge area is given over to heavily made-up young women who are only too pleased to practice their art on passers-by (but rarely seem to find anyone willing) the area given to the Chemist's is miniscule and very old fashioned. The only thing modern about them is the 'Prescriptions' sign.
Their stock of tablets are all found on some revolving merry-go-round in the middle of their small room, and every time someone spins it, it looks as if it's about to fall to bits.
If I was the CEO of Boots, I'd be having a serious look at all my stores. Someone should do a time and motion study. Huge queues at the tiny pharmacy, no-one at the make-up dep'ts, and a huge baby dep't upstairs that is permanently empty. It doesn't take a genius to know what needs to be done!
p.s. I might add that M & S needs the same attention. 99% of the people who enter our large store head directly to the food dep't, which I think makes-up about 15% of the store's area. The clothes dep't, and home wares dep't that occupy half the ground floor, all of the first floor, and all of the second floor, are mostly empty.
Doh!
Posted by Cro Magnon at 04:27