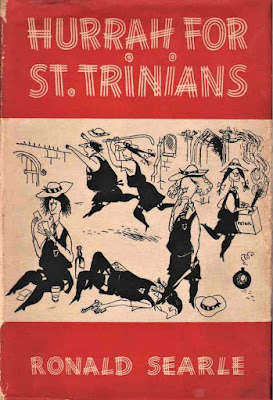 I was reminded about this by Pipistrello from 'Flying with Hands'; so thank you.

Back in the mid-60's I was managing a small Art Gallery in London's Devonshire Street W1.

We specialised in early topographical watercolours, but also sold just about everything else that was pre around 1950. Modern, we didn't do.

My boss, Miklos Vilag, was a rather eccentric man, with a noticeable resemblance to Albert Einstein.

Miklos (known in English as Nicholas) oozed confidence; there was nothing he couldn't achieve, including making a deal with various Fleet Street newspapers to hold an exhibition of (and to sell) works by all the most famous cartoonists of the day.

The work involved was huge. We had to frame about 200 cartoons, totally clear the gallery of all it's regular stock, send out invitations for the Vernissage, and expect to be extremely busy for a period of two weeks.

Sadly, one name was missing from amongst our stable of cartoonists; that of Ronald Searle. Miklos really wanted to include him as he knew he was extremely saleable. He spoke with him over the phone, and RS agreed to sell about 20 works through us. As Searle lived in Paris, I was given the job of going over to see him, select the works, and bring them back.

A few days before I was due to leave, he phoned us and said he'd decided not to exhibit. I was deprived of both a trip to Paris, and of meeting the great man himself. Frankly I was extremely upset; I'd been telling everyone for weeks that I was going to meet Ronald Searle!

Anyway, amongst those who did exhibit were Vicky, Giles, Steadman, Bill Tidy, Reg Smythe, Thelwell, and many others. A superb bunch of very talented artists, and their work sold very well.

I just know you're dying to ask who sold the most. Well, it was Thelwell; mothers of small pony-riding daughters came from all corners of the earth to buy little Penelope her next birthday present.

p.s. When my boss Nicholas was on the phone, he used to 'twiddle' with his long greying hair; producing (what looked like) horns on either side of his head. He would then wander around looking like some strange animal for the rest of the day. I never said anything to him, preferring to watch people as they sniggered.