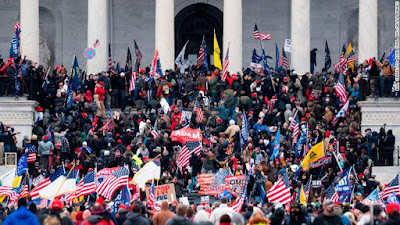 There is no question that many social injustices have been overturned, and corrected, following civil unrest, but to attempt to overturn the results of a Presidential Election by similar means is not only undemocratic, but, frankly, ridiculous.

However, a regular mélange of anarchists, civil libertarians, Marxists, hooded opportunist tracksuit-wearing rabble-rousers, Fascists, and even CND supporters, see fit to cause trouble for their governments by taking to the streets, and rioting. Personally I can never see this as a 'right'. Peaceful protest OK, but not wanton destruction.

At present on the world's streets are Proud Boys, Rebellion Extinction lovies, BLM activists, every day Anarchists, and MAGA red-necks, amongst a multitude of other groups. Some are peaceful; others are no less than well-armed destructive militia. Those who recently stormed The Capitol are plainly just ill-informed criminal hooligans.

Ex-UK Prime minister, David Cameron, rightly said "No government I lead will ever put those who fight to defend democracy, on the same footing as those who seek to destroy it". Our problem is that the less one does to quell such destruction and violence on our streets, the more it gives encouragement to those those who are out for blood.

No-one wishes to stop peaceful demonstration; it's all part of the democratic process. But overtly violent mobs on our streets should be dealt with swiftly and sharply. When Boris was Mayor of London he bought several water cannons to give such people a good soaking, but the bleeding heart do-gooders claimed it was against their human rights to be drenched, and the cannons were banned and eventually sold for scrap; at a loss to the good folk of London of £300,000.

There's a fine line between lawful and unlawful protest, but when destructive looting takes place, and the police, and government property, attacked, then immediate action should and must be taken, and those who have instigated the violence made to face the law; or even impeachment.