The expression 'There's never a dull moment' is not always true; we have plenty of dull moments.

It's not every day that I encounter screaming women, people who smash brand new water meters, or even folk who openly steal copyrights. Such goings-on, although not exactly every-day events, do, occasionally, give me something 'interesting' to write about. Otherwise I'm obliged to consider much more mundane subjects, such as Cassoulet, Trugs, and Tree Houses. 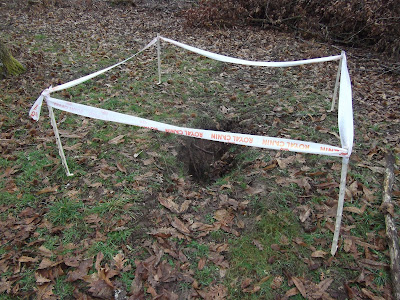 So, you can imagine my 'excitement' when I spotted this taped-off area just fifty metres from our cottage. Of course, I was obliged to inspect. 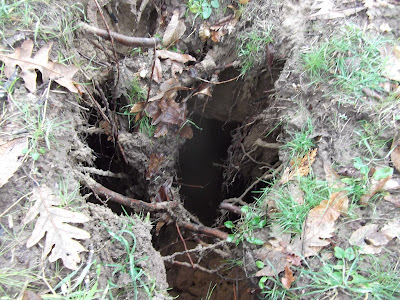 It turned-out to be a mini-sink-hole. It's not particularly deep; I estimated about two metres. But the fact that it suddenly appeared overnight is 'of interest'.
I mentioned it to my neighbour J, and he told me of another one, much bigger, in the woods nearby, that has simply been left as it was found. Not filled-in, but still a large gaping hole. I didn't ask where it was exactly, as I think I'd rather not know.
I suspect that there are many more in the immediate area; probably caused by constant erosion from underground streams.
As long as one doesn't suddenly appear in Haddock's; I shall try to ignore them!
Posted by Cro Magnon at 04:23