Life is filled with things that either please or annoy. I've tended to have more of the latter recently.

I can't exactly claim that this annoyed me, but it certainly disappointed. When I spotted this large can of Confit de Porc (below), the picture looked appealing; it does; doesn't it. It wasn't overly expensive, so I invested. That was about two years ago. 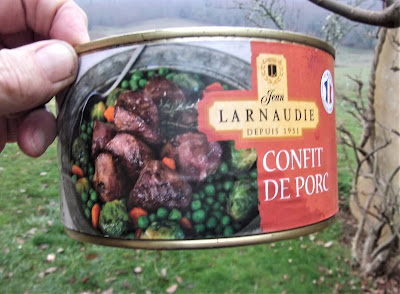 I decided to open the can a couple of days ago. The pork (like duck) had been cooked and preserved in it's own fat (confit-ed), which when melted revealed 4 rectangular, small, unattractive looking, pieces of pork; it appeared very industrial. The meat itself was OK-ish, but I shan't be buying it again; in fact I haven't seen it on sale since. I imagine they were testing the market, and the market said 'No'. I think the market was right

Next, our new iPhone. We had always resisted buying an iPhone, but that resistance was futile. When I turn it on, it asks me to "press 'Home' to open" (see below). 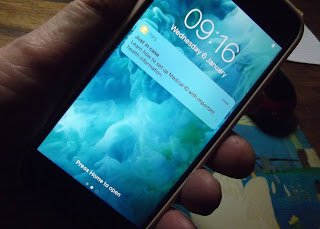 However, I couldn't find anything that said 'Home' to press, so already I was confused. No wonder I hate these bloody things. Honestly; why can't they make something that simply turns on, shows you a 'dialling' keyboard, or a list of contacts.

Anyway, I had to Skype my son, Kimbo, in England to have basic lessons in 'iPhones for idiots'. I'm getting there; I think.

I'm having ONE 'words of one syllable' lesson a day. I now know how to make a phone call, use WhatsApp, and measure if my pictures are level. I also now know where the 'Home' button is. 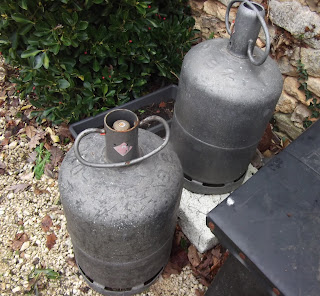 Why is it that gas bottles always run out at the most inconvenient time imaginable?
If I was simply heating some baked beans, I wouldn't worry; but when I am only just managing to keep four balls in the air (metaphorically); it really isn't the moment to misbehave.
I shall say no more.
Posted by Cro Magnon at 04:35