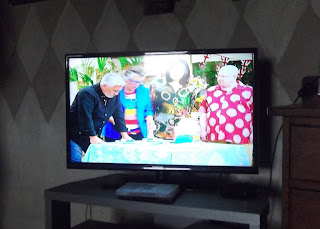 The only cake I've ever baked was an Olive and Bacon Cake, and it was delicious.
Baking as a gastro-occupation has never appealed to me, but watching others compete with their baking talents has a strange appeal.
Bake Off 2020 has just begun, and luckily the programme is being repeated on Saturday afternoons (E4 1.00 pm). Perfect viewing for damp or cold afternoons.
The first episode has just taken place, and it was filled with drama. There were accidents, collapses, and a few dreadful attempts at portraiture.
Without question the most interesting challenge was the 'portrait cake'. Each contestant was asked to choose a favourite personality to depict in cake. We saw Bob Marley, Freddy Mercury, David Attenborough, Bill Bryson, and even (predictably) Marie Antoinette. All were pretty disastrous, but the programme's presenters did manage to say a few nice things about their edibility.
It's a fun TV Programme, with a weekly elimination. The culinary tasks become more exacting as the weeks pass, the contestants reduce in numbers, and the programme eventually builds to a tense finale to find the winner.
Who would have thought that a cake baking programme would have been so popular!
Posted by Cro Magnon at 04:33