Just another weekend in Loony-Ville. 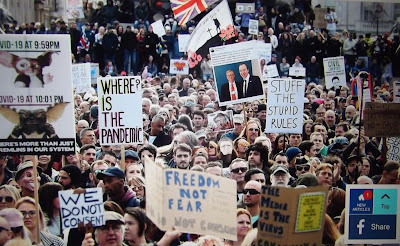 Here we go again. This is last weekend's gathering of the loonies. No masks, no acceptance of any pandemic, and sadly not a single working brain between them.
On Saturday over 15,000 gathered in London's Trafalgar Square to declare that the pandemic doesn't exist, or if it does it's the fault of 5G technology, Bill Gates, or Boris; preferably all three. The usual suspects were pontificating; Piers Corbyn about conspiracy theories, and David Icke probably about The Queen being a Lizard.
You really couldn't make it up. There they all were, breathing all over each other, madly spreading the virus whilst claiming it doesn't exist, and amusing themselves by throwing bricks at the police.
There were just 16 arrests! Why were they not ALL arrested? Not wearing a mask in public is an offence, as are gatherings of over 30 (I think). 9 Police were injured.
Amongst the crowd one could see the familiar white masks and banners of the 'class war' anarchist movement. Yes, they were all there; every ding-bat in London.
There's only one conspiracy amongst these folk; you spread the virus as much as possible, then blame Boris. Puerile.
Posted by Cro Magnon at 16:18