A tale of two parcels. 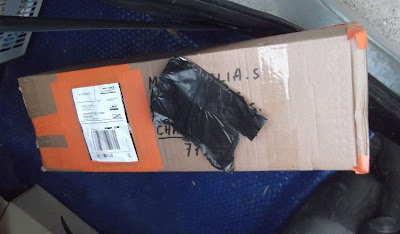 I hardly know where to begin with this story; it is bizarre to say the least.

Firstly let me say that we've had more strange behaviour from the French postal services than I thought was possible. This is just another example amongst many I could offer, although officially this one is the fault of Parcel Force and their French equivalent.

Two days ago, at mid-day, a man arrived with a big 4.4 kilo parcel. He handed it over, and hurriedly left.

Lady M had a look at what was inside, and it turned out to be some English hand-made leather seat covers for some classic car. Had the parcel been for Kellogg it would have contained some essential oils.

Luckily the Parisian man's phone number was on the address label, so I called him; and, yes, he had Kellogg's parcel. We laughed a bit, scratched our heads, and tried to find a logical answer to their mistake..... we couldn't.

Well the pantomime ended with me having to re-wrap it, take it down to The Post Office (yes, that one) and send it to where it should have been delivered in the first place. He will do much the same with ours. It cost me €13.75 (not too bad I suppose)

p.s. Just for fun, I will add this other strange story. My youngest son had sent a correctly addressed large parcel to his Mother-in-law in Sweden, and paid €60 for the pleasure. Two days later it was delivered back to him, HERE. When he returned to The Post Office (yes, that one again) to explain that they'd made an amusing mistake, he was made to pay for it all over again; another €60. They wouldn't budge! What a bloody con!