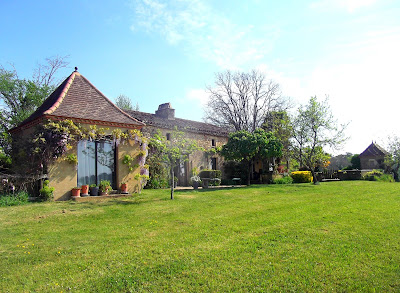 I've never doubted the wisdom of living out in the country. I understand that it's a lifestyle that isn't open, or suited, to everyone, but for those to whom it is; it's wonderful.

When I moved from my house on the Welsh borders, it was to provide a home that was suitable to raise my (then) two small children. I needed a large-ish house, plenty of barns and other outbuildings, and a couple of acres of land. A decent sized property.

My quest stopped outside the tall stone gate posts that led into the courtyard of an old farmhouse, and surrounding barns. The house had been unoccupied for a few years, but after a quick clean was livable in at once. I bought it.

I had been looking for a home where my children could play safely, and have open fields and woodland as their extended playroom. I wanted them to breathe pure fresh air, and to have the advantage of home produced fruit and vegetables. I wanted them run with our dog (Hamlet) wherever they wished, and to have daily adventures. This property seemed to offer everything I'd wished for; and it was affordable.

All this was over 45 years ago, and I think the children had the very best childhood I could have offered them; and as a bonus they both later learned to speak French at the local school.

These days I look at my decision anew. We are no longer in that original farmhouse, but just a couple of hundred metres away in a tiny, but very pleasant, little cottage (above) with unbroken views over open countryside; and not a coronavirus in sight.

The two children who came with us on our adventure both now live in big cities; one in London, the other in Brisbane. Our third child, who arrived a little later, is presently living in Amsterdam.

I'm still very happy to be living away from the madding crowd; away from pollution, away from crime, and away from all the hussle and bussle. It remains to be seen, of course, but hopefully we will remain away from illness as well.

However, not all is as it was here in our little corner of paradis, as there are some around us who we'd prefer lived elsewhere. Threats have been made, and we've suspiciously lost two dogs to possible poisoning. The natural friendliness of genuine country folk has been, in part, exchanged for the ways of urban newcomers. Change is not always for the better, so we continue to keep ourselves mostly to ourselves.

I've recently been talking to neighbours that I've known since we first moved here, and they still believe (as I do) that we are in as safe a place as anywhere. Our only problem would come from town dwellers heading for their second homes in the country, and bringing viruses with them (even though I believe such travel is outlawed).

The weather isn't always perfect, the red wine doesn't always taste like Pétrus, and one can't expect ALL one's neighbours to be 'couth'; but I'm still extremely happy living where I do.

I'm just praying that the virus stays well away.