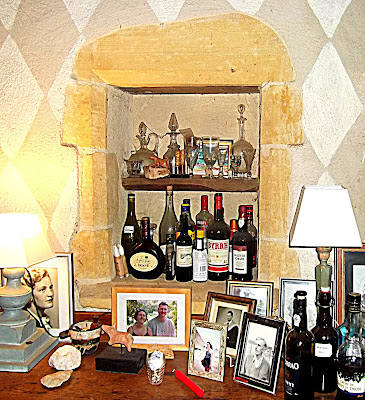 When I first bought our tiny cottage, it was no more than a ruin.

As you entered via the remains of the 'front door', immediately around to the left was the ancient stone sink, on the left hand wall was a huge open fireplace, and on the wall opposite was a very large, 40 cms deep, integral cupboard, with a single rotten door hanging off its hinge.

The sink and fireplace were both intact, and simply required cleaning and patching. But the huge cupboard occupied almost all of one whole wall and obviously required alteration.

It was a question of either filling-in the whole thing, or reducing its size dramatically. I chose the latter.

I had a few bits of stone hanging around, so I gave them some chamfered edges, and made what I thought, at the time, was how it might have looked had they done the same thing 300 years previously. It was easy to cut, and easy to install. It also now looks as if it might have been 'original'.

It's strange to think that all those years ago, all the family's glasses, bowls, plates, and cooking utensils would have been kept on those shelves. These days it's home to a mouse, a few bottles and glasses, and some old decanters.

Other than making a more solid cupboard, it has left plenty of space either side for hanging paintings. The initial shelf-room has been reduced by about 80%.

It's better than it was, and you'd never know it was new.