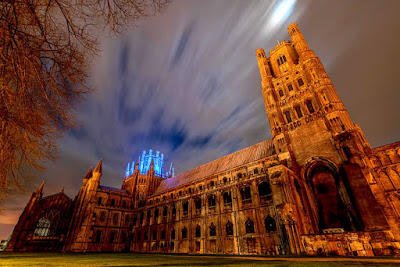 England is very lucky to have so many splendid ancient cathedrals; some in unlikely places, such as the above.

This cathedral, in its current form, was established in 970; the same date as its accompanying school.

It is built with stone imported from Barnack in Northamptonshire. The quarry was owned by Peterborough Abbey, to whom the builders paid 8,000 Eels per annum. (Ely was named after its waterways filled with Eels; now mostly fished to extinction)

It's a very large cathedral, and its octagonal Lantern Tower (lit in blue) is a miracle of medieval building. As spectacular from the exterior as the interior, its illogical method of construction is still something of a mystery to today's architects.

It's the one building that has influenced my life more than any other. I look at the above image in awe.

If you're passing nearby, pop in; it's well worth a visit.