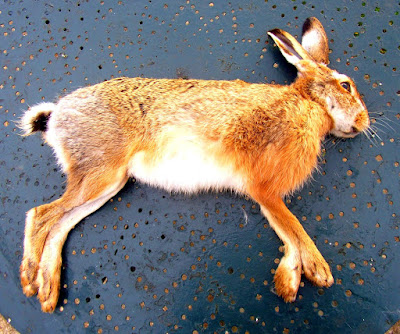 We have Hares in our vicinity, but no Rabbits.

I've seen a couple of Hares recently; they truly are majestic creatures.

People mention Rabbits and Hares in the same context, as if they are almost the same thing; but they are different in many ways.

Rabbits live below ground in burrows; Hares live above ground on 'forms', which are open sloping bare patches of earth, the size of the animal itself. Hares also give birth to fully furred, seeing, young, that fend for themselves almost at once. Baby Rabbits are blind and less furry, and remain with their mothers underground for several weeks.

Hares are perhaps a third larger than Rabbits, they have longer ears, and black markings on the tail.

As far as gastronomy is concerned, they both make very good eating, but I would prefer to eat Rabbits as they are more of a pest than Hares; and far more numerous The one above was caught for me by our late Labrador Monty, and it became a classic Civet de Lievre. Anyone who has 'prepared' a Hare will know that this an unpleasant job; skinning and emptying a Rabbit is child's play in comparison.

Our larger local wildlife consists of Red and Roe Deer, Wild Boar, Foxes, Badgers, Hares, and some Coypus (Lady M saw one yesterday). Not a huge selection, but all lovely animals (except the Coypus).

The culling, and eating, of Roe Deer and Wild Boar is essential in the countryside. Both can over-breed, and both can be quite destructive. But let's leave the Red Deer, Badgers, Foxes, and Hares alone. They seem to control their own numbers, and are too rare and beautiful to be hunted.